Oct 16 :: …or How I Learned to Stop Worrying and Love the Tuzz 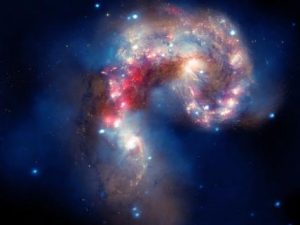 This photo has nothing to do with anything, but I recently learned that NASA images and video are public domain, so... here we go.

WHAT’S ALL THIS THEN?
The Wings head into the desert to face the Coyotes. No word yet if @mserven, @bizcassty, @bingobangodrw, or @sullyosis will be in attendance. Puck drops at 9 o’clock in the East.

WHAT’S THE BIG IDEA?
Game #5, following a straight-up ass-whoopin’. Oh, and we’re minus one Johan. Fantastic. We’ll be playing a man short — what are we, the Devils? — since the team doesn’t have cap space to call someone up. Not quite sure why Rafalski’s not on LTIR yet, but here we are… five players injured, zero healthy scratches, and 19 warm bodies. At least one of them is Doug Janik. Thank Jeebus for that.

NOW WHERE WERE WE?
The Dogs were the first round foes of our beloved Winged Wheelers. Phoenix was dispatched in seven games. If I’m not mistaken, seven was also the number of stupid rubber snakes that hit the ice. All series, I mean. Way to go, Arizona! The final score of the most recent contest was 6-1. Datsyuk and Lidstrom had two each, Bertuzzi and Stuart had the others.

OH, HI AGAIN.
Ray Whitney played 67 games for the Wings — and another 12 in the post-season. Sami Lepisto is Valtteri Filppula’s best friend…so there’s that.

MEMBA ME?!
Only one former Yote on the roster — Dan Cleary.

BEST NAME NOMINEE
Oliver Ekman-Larsson. Hyphens get the win more often than not in this category. Which is odd because I hate hyphenated names everywhere else.

THEIR LAST GAMES
:: The Wings got their as– HEY, I see what you did there. It’s over and it never happened.
:: The Coyotes haven’t played since Sunday (WHAT’S WITH PLAYING TEAMS WITH SUPER HUGE LAYOFFS?!), and they were curb-stomped 3-0 against Boston.

Injuries [theme courtesy of @FightNightatJoe]
Kris “I Don’t Want No Horsin’ Around” Draper [groin]
Justin “One of Them Doomsday Machines” Abdelkader [ribs]
Jonathan “A Big Plane Like a 52…Varoom!” Ericsson [back]
Brian “Mein Fuhrer! I Can Walk!” Rafalski [knee]
Johan “Don’t Give a Hoot in Hell How You Do It” Franzen [brain]

Honorable Mentions
Todd “This Man is Obviously a Psychotic” Bertuzzi
Jiri “Toe to Toe With the Ruskies” Hudler
Jiri “Some Kind of Deviant Pervert” Hudler
Doug “You Can’t Fight in Here” Janik
Brett “Shoot, A Fella Could Have a Pretty Good Weekend in Vegas With All That Stuff” Lebda

QUICK THOUGHTS
1. If you don’t already (but I’m sure you do), follow @BizNasty2point0 right now.
2. Playing with eleven forwards shouldn’t make a HUGE deal, but I guess we’ll see, eh?
3. Also worth noting is that Dan Cleary was nearly injured in practice (you better cut that shit out — we have enough trouble getting through games, son), so keep your eyes on him to make sure he doesn’t look worse for wear.
4. The top line guys were horrendous on Thursday — so I’m sure they’re all anxious to get back on the + side.
5.  Drew Miller on the 2’s. Let’s see where this goes.

WHAT WE LEARNED AGAINST THE STARS
Apparently — and stop me if you’ve heard this before — Chris Osgood isn’t to blame for anything ever. Also, Brad Stuart wanted no part of helping out.