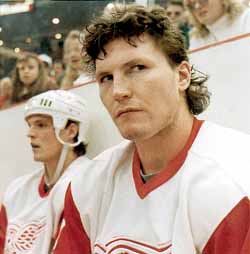 This one's for Probie

It’s been an eventful summer. We’ve moved over to some fancy new digs, re-launched and re-branded the podcast, wished Steve Yzerman good luck, said a more permanent goodbye to Bob Probert, made friends with The Diamond, covered the Draft, hosted the second annual roundtable, tried our best to find Johnny Rig some work, appealed to Commissioner Draper for some semi-nude hockey players, someone agreed to marry me…

Quite a bit has happened in TPLand — but even more has happened in Red Wings Nation. We suffered through the longest summer in years, where we were forced to watch Little Brother grope the shit out of our ex — but had a good chuckle as they were dismantled like a Cadillac left on the street near Cabrini Green. We had a scare that Nick Lidstrom might move onto the next phase of his brilliant career, we had a good chuckle at Lilja’s situation before feeling bad for him, we got to debate the finer points of Team Miller vs. Team Ritola, we panicked ever-so-slightly when Darren Helm wasn’t signed — immediately — to a 400-year contract.

But summer’s over. Guess what today is. It’s Hockey Day. It’s like Christmas, only better. More poetic. More exciting. More intense. More celebratory. It’s the best day since May 8th (aside from August 7th).

Our Wings are back. Man the #fuckyeah torpedoes.

WHAT’S ALL THIS THEN?
The Detroit Red Wings begin their 84th NHL season, by taking on the Anaheim Ducks in Detroit. SCRATCH THAT! Clearly, someone thought better of this ridiculous plan and pushed games back to 7:30 — where they belong.

WHAT’S THE BIG IDEA?
Right now, the Wings are in first place. But they’re also in last place. Start the season off on the right foot, and avoid feeling what we felt last season — when the Wings mailed it in in Sweden, setting the tone for a mediocre (by Red Wings standards) season. Let’s stay healthy all year and see what a difference it makes. The pre-season was scary as hell in this department, but these games count and players play through some things they wouldn’t in the exhibition season. If we pray to the right folks, perhaps none of our boys will have to play through anything.

NOW WHERE WERE WE?
The last time these two clubs met was February 3rd. It was a continuation of Hate Week and the nickname theme was Ice Cube lyrics. The Wings were 3-1 losers, and Tiberius took the L. Pavel Datsyuk was the only goal scorer for the good guys — and Franzen was only two games away from returning. It was Ville Leino’s final game as a Red Wings and he — SURPRISE! — spent it in the press box.

OH, HI AGAIN.
There are no former Red Wings on the Ducks.

MEMBA ME?!
Drew Miller, Ruslan Salei, and Todd Bertuzzi are all former Ducks.

BEST NAME NOMINEE
I think it’s pretty obvious we have to go with Cam FOWLer here, because that joke is going to get old real fast.

THEIR LAST GAMES
The Wings dropped Game 5 of the Conference Semi-Final, and the Ducks kicked the shit out of the Oilers 7-2, but failed to make the playoffs — proving that, yes, more than one team can win their final game of the season.

EXPECTED LINEUP
In the spirit of aforementioned matrimony, I used songs from our playlist for the nicknames. See if you can pick which (if any) of the songs were chosen by yours truly, and which belong to my lovely bride.

Scratches
Jakub “And We Danced” Kindl

QUICK THOUGHTS
1. A strong effort from Jimmy Howard will go a long way in proving that 26-year-olds are immune to sophomore slumps.
2. If earlier-in-the-week’s practice lines are to be trusted, Jonathan Ericsson (arguably the worst player in the solar system) will begin the game paired with Nicklas Lidstrom (inarguably the best player of all time). Ellen’s got a little bit of a pool going, and if she asked how long this pairing would last — the answer would have been “two shifts.”
3. The Reunited (And It Feels So Good) Circus Line should click immediately since they’re… ya know… three of the best in the business at what they do.
4. Mike Modano jumps on the ice at home (in a game that counts) for the first time since high school. What an incredible feeling that has to be — and I wish him the best of luck. Go get ’em.
5. I’m sure that the Wings have something magical planned for the opening ceremony — as they always do — but I sincerely hope it involves 20,058 people chanting “Probie” so loud that it drowns out the national anthem. Like it did when he was with us.

WHAT WE LEARNED WITH A PROLONGED SUMMER
Summer sucks. And I bet you dollars to donuts that the players would trade those thirty days off for a shiny piece of jewelry. 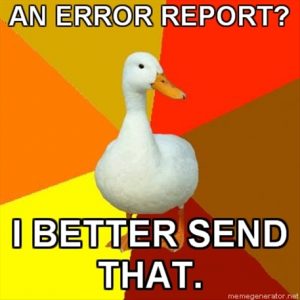 13 thoughts on “Time to Officially Run and Tell Dat”