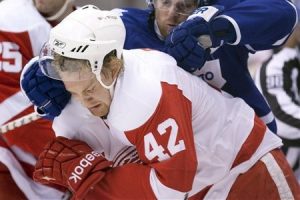 Busy few minutes for the Red Wings organization on Tuesday afternoon, as we all learned Mattias Ritola was claimed off of waivers by Tampa Bay Lightning and Steve Yzerman. He had lost the battle for the final spot on the roster to Drew Miller, and in an attempt to sneak him down to Grand Rapids, he was exposed to the waiver wire. There’s no word on how many teams actually put their claim in, but he’ll join the Lightning in time for the season opener.

Ironically, it was the Lightning who waived Drew Miller last season, giving the Wings the opportunity to snatch up a valuable player that found a home in Motown, killing penalties and playing strong fourth line minutes. It sounds odd, but Ritola-to-Tampa, Miller-to-Detroit can be viewed as a delayed trade. And it’s a trade I’d make 100 times out of 100.

While it’s upsetting to lose a player for nothing — particularly, a player that you’ve drafted and developed — it was clear that he wasn’t demanding a place on this roster the way that other young players have — such as Darren Helm and Justin Abdelkader.

Other players that were waived yesterday — Jan Mursak, Joey MacDonald, and Doug Janik — all cleared and will report to Grand Rapids.

In order to get under the 23-man roster limit, the Red Wings needed to make a few more trims, and at noon it was announced that long-time Grind Line winger Kirk Maltby and defenseman Derek Meech were placed on waivers. Teams have until noon on Wednesday to make a claim for either. If they go unclaimed, both will be assigned to Grand Rapids. Whether they report, however, is another story…

With Meech and Maltby’s waiving, the team is down to 23 players. Meet your 2010-11 Detroit Red Wings:

1 thought on “Wings Lose Ritola to Tampa, Place Meech and Maltby on Waivers”