#18 jersey still not available in Detroit 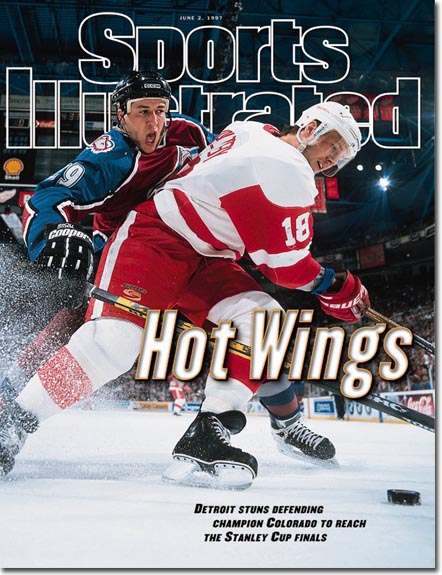 RELEVANT! It was mentioned last week that Maltby made an SI cover, but Yzerman never did (commemorative issues excluded). This is said cover.

Guess who’s joining the Red Wings for a 15th year?

Calm down, crowd-of-you-that’s-yelling-about-giving-youth-a-chance. It’s extremely unlikely that Kirk Maltby will be a member of the Detroit Red Wings for the bulk of the season — instead spending the majority of his two-way contract hangin’ out with soon-to-be-named Vice President Kujawa in Grand Rapids before making his way up to the NHL squad in time for the loosened roster restrictions come playoff time.

Hollis penned a nice open letter to Maltby on Thursday, and while I agree it’d be great to see Kirk continue his NHL career in an actual NHL capacity, he — like so many other Red Wings — has chosen to remain loyal to the cause.

I bet you can’t name more than a handful of guys on the entire planet that would be better locker room presences in the playoffs than four-time Stanley Cup champion and Hall-of-Fame yapper Kirkland Maltby IV (note: not actually his name).

Maltby originally joined the Red Wings in 1996 — in a trade with the Edmonton Oilers (Dan McGillis FTW!). In the fourteen seasons that followed, he didn’t play in the post-season tournament only once: last season, following a season-ending shoulder injury that conveniently coincided with Andreas Lilja’s return to action.

I’m a big fan of Kirk Maltby — and it’d be fitting if he calls it a career in the same summer as Kris Draper (who has a NO TRADE CLAUSE, for what it’s worth), and (God willing) Chris Osgood. I understand that there comes a time when you have to say goodbye to the veterans and the nostalgia to make way for the Danger and the Gator — and I’m fully aware that now is very likely that time for Kirk Maltby. But, he’s one of my favorite players of all-time, and I would prefer he would have the opportunity to say goodbye to the game on his own terms — and not forced out by an injury. Maltby needs that final lap in front of the crowd at the Joe so that we can let him know how much he means to us.

While I am a nostalgic sumumabitch, I’m also a realist and I’m aware that Kirk Maltby doesn’t particularly fit on this roster —  not when guys like Patrick Eaves and Drew Miller may be scratched due to a strangely well-populated fourth line. Not to mention, we’ve already got 24 guys — which is one more than you’re allowed.

Good luck to Kirk Maltby — I literally can’t wait to see him in uniform during the playoffs, even though it’ll very likely just be for warmups. Just like Chris Chelios a few seasons ago, that’s all I need.

1 thought on “#18 jersey still not available in Detroit”