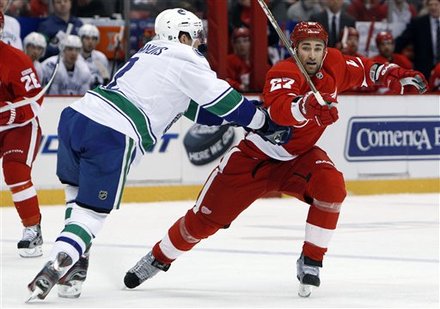 For the second off-season in a row, we — as well as our good friends at Winging it in Motown — are taking a look at the Red Wings’ upcoming free agents and asking the community for their input. Read all of the important information and then place your vote — should the Wings try to get Kyle Quincey under contract for 2012-13, or was his late-season acquisition a rental?

CONTRACT SITUATION
After a season in Colorado, the Avs re-signed Kyle Quincey to a two-year extension worth an average of $3.125M per season, which was a sizable raise from his previous salary (which the Red Wings signed him to) of $525,000. Chances are slim he’ll get another 600% raise, and some of us even hope that he’s willing to take a haircut to stick around with the Red Wings again. However, it’s a thin crop of free agents and nearly all of them will command Ericsson money, so why not Quincey?

What sets Quincey apart from many of those other defensemen is that he’s a restricted free agent — meaning the Wings will have the right to match any offer he signs, or accept draft pick compensation if they choose to let him walk. His salary is high enough that he’s not eligible for a 10% “qualifying offer” raise.

DEPTH SITUATION
Quincey may have been acquired as a contingency plan in case Brad Stuart departs, which — as we discussed — has seemed likely for quite some time. He was inserted into the lineup and stayed there, though he wasn’t as dependable or as relied upon as Stuart has been since he came from out West. Nevertheless, if Quincey were to be re-signed, he’d remain an everyday player for the Detroit Red Wings. With Nicklas Lidstrom retiring and Stuart likely departing, there are plenty of spots open on the blueline.

CASE FOR QUINCEY
1) The blueline is already in a whole bunch of flux. Nicklas Lidstrom is leaving a void that simply can’t be filled. Brad Stuart is very likely heading West to be with his family. Brian Rafalski departed rather abruptly the season before it. Wouldn’t it be nice if there was some stability, even if I think the team needs to get some fresh blood injected into its veins.
2) Ken Holland said so himself: they never should have let Kyle Quincey leave the first time around (instead opting to keep Derek Meech who is toiling in the Winnipeg Jets’ minor league system). He’s a talented kid, he’s young enough to be just coming into his prime, and he’s a big boy.
3) Strangely, he had better numbers than Brad Stuart last season. 7 goals (compared to 6), 19 assists (instead of 15), and more minutes played (but that’s thanks to playing on the shitty Avs for most of the season).

CASE AGAINST QUINCEY
1) After a spectacular first game with the Wings, he was fairly unimpressive down the stretch and in the playoffs. There was dumb penalty on top of dumb penalty and he needed longer than you’d think someone who “grew up” in the Wings’ system to get re-acquainted.
2) There’s a ton of money in the till during this off-season, so perhaps the Wings would be better served spending this 3ish million on another guy that will play the third pairing.
3) Building on that last bullet point in the “for” header… he also took three times as many penalties as Brad Stuart.

WHAT HE’S SAYING
After admitting that he had a hard time adjusting to a new team in the middle of the season, he spoke as if he fully expends to don the winged wheel on opening night. Per Ted Kulfan of the Detroit News:

It’s just a different role (after a trade). You get a role on any team. You come here, and you have to find your new role. Every team you go on, you’re going to be in a different role.

That’s part of the game. That’s why they pay you.

After a while you kind of see where you fit in. Special teams are where I fit in here the most. You know your role. You come to the rink every day and you know what you have to focus on.

SALARY RANGE
Like I mentioned a little earlier, it’s entirely possible he takes a lower average salary in exchange for some job security or a no-trade clause or whatever. However, he won’t take that much of a bite, so he could come in around $2.75M… or as high as the 4’s. Depending on the role he signs on for and how happy he is to be in Detroit again, expect him in that nieghborhood somewhere.

Internal :: We all know that Brendan Smith is ready for primetime and that Jakub Kindl can be relied upon more than he has been in recent years, though they’re different players than Quincey. Aside from that, there’s no one waiting in the wings (as it were).
External :: We’re all (still) hoping for Suter, and then there’s Matt Carle, Bryan Allen, Carlo Colaiacovo, Chris Campoli, Kurt Sauer, and Milan Jurcina on the market.

WHAT DO YOU THINK
Use the form below to give us your take on whether the Wings should try to get Kyle Quincey back at a reasonable rate. Then, sound off in the comments with your thoughts.