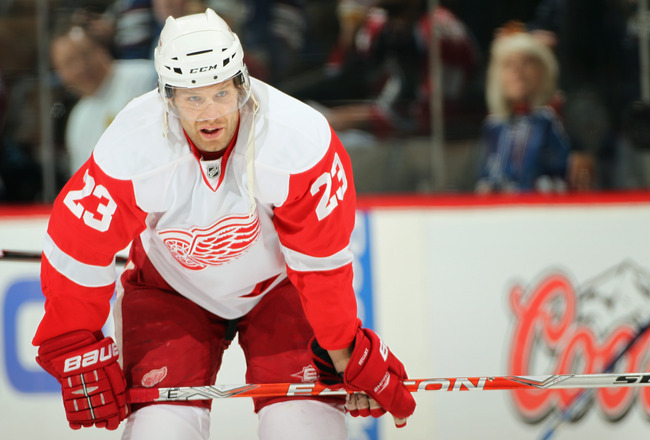 For the second off-season in a row, we — as well as our good friends at Winging it in Motown — are taking a look at the Red Wings’ upcoming free agents and asking the community for their input. Read all of the important information and then place your vote — should the Wings try to get Brad Stuart under contract for 2012-13, or has that ship sailed?

CONTRACT SITUATION
In the three seasons following the lockout, Brad Stuart played on six different teams. The Sharks traded him to Boston as part of the deal that sent Joe Thornton to San Jose. The next season, the Bruins flipped him to Calgary because Stuart was not interested in re-signing in Boston. At the end of that season, he signed in Los Angeles — we now know that he prefers to be on the Left Coast because of a situation involving his wife and daughters. In LA on a one-year deal, and the Kings finding themselves in last place in the league, Stuart was a deadline day trade to the President’s Trophy winning Detroit Red Wings, where he promptly helped to win a Stanley Cup.

DEPTH SITUATION
Stuart was an everyday player for the Red Wings, and will be an everyday player no matter where he ends up. Most of his time was spent paired with Niklas Kronwall on the second pairing. He’s a legit top-four defenseman in the NHL, and may very well be a top-two defenseman for any number of teams that could benefit from having him patrol the blueline. Brendan Smith is ready to make the jump to the NHL full-time, but Brad Stuart’s job would not be in danger — no matter what happens with Nicklas Lidstrom. His contract situation will be a personal decision — whether he wants to endure more time away from his family, or if he’s ready to take his ring and move back West.

CASE FOR STUART
1) For the bulk of the four-plus seasons he spent in red and white, Brad Stuart has been an extremely reliable defenseman. He was a healthy scratch a grand total of zero times — and only missed one game this past season (illness). In 2010-11, he missed 15 games after having his jaw broken by Tom Kostopoulus. In 2008-09, he missed 13 games with torn rib cartilage. In 2009-10, he suited up for all 82 games. Steady on the blueline, and brutally strong with the physical play, he was good for twenty-ish points each season, which is tough to find on this year’s open market.
2) With captain Nicklas Lidstrom’s future uncertain, potentially losing half of the top four blueliners would be a really tough hit to take. This year’s crop of free agents isn’t particularly impressive (two of the six “biggest name” defensemen are current Red Wings), so the back end may take a step backwards losing Stuart.
3) Building on that, there’s not really anyone out there that’s capable of replacing Stuart right now. A lot of Wings fans are hoping that Ryan Suter finds his way to Motown, but if he re-signs with Nashville (or somewhere else for that matter), the best player available for the Wings’ needs is, in fact, Brad Stuart. Uh oh.

CASE AGAINST STUART
1) As the season wore on, it became more and more apparent that Brad Stuart had checked out. It’s no secret he’d prefer to be playing hockey nearer to his family (more on that in a second), and his play dropped off significantly after the Wings’ mid-March trip to the West Coast, almost like he’s given up and just wanted to stay behind.
2) Continuing that string of mental unpreparedness was his playoff performance. He was a team-worst -5 in the five game series against Nashville (tied with… WAIT FOR IT… Todd Bertuzzi). I wrote following the playoffs that his bags were probably already packed and he cracked open a brew to watch the second round from his living room in California. I’d like to make it clear that I don’t blame him for wanting to play closer to home, and I don’t think he owes the Red Wings anything: he was a good soldier for four years and it’s no secret that being that far away from what makes you happy chips away at your conscious and soon enough you find yourself yearning to make a change. That’s where Brad Stuart is in his life at the moment.
3) While they may not be immediate replacements for Brad Stuart, there are a handful of young defensemen within the organization that would benefit from having a great chance to prove their worth on the big club. Brendan Smith, who’s very likely going to start the season on the NHL roster, may have been in Grand Rapids a little longer than he needed. Jakub Kindl, who’s been shuttled back and forth from the press box, would benefit from having a constant place in the active lineup. The Wings are in decent shape to replace some players who may be departing.

WHAT HE’S SAYING
For his part, Brad Stuart has been surprisingly forthcoming regarding his thoughts about the future. Via Brendan Savage of MLive, as well as Helene St. James of the Fress Press, Stuart had the following to say immediately following the Wings’ loss to the Predators:

I love it here. If it was a purely hockey decision, I would stay. But I’ve got other things to consider and factors other than just hockey. Those are things I guess I’ll have to figure out in the next month and a half.

It’s a great organization from the top to the bottom and everybody enjoys playing here and they’ve got a great core of players and some of the best players I’ve ever played with. It’s pretty easy to figure out why it’s such a good team.

I’ve been living here while my family has spent a lot of time in California,” Stuart said. “I’ve got a step-daughter that needs to finish high school. That’s how it is. There’s really no way to get around that. I guess it will be up to me to decide what needs to be done, because it’s been a tough couple of years. As much fun and as great as it’s been to play here, it’s been equally as tough on the family side of it.

SALARY RANGE
Stuart earned a moderate raise after his audition with the Red Wings in ’08. He’s likely to get another one of those if he hits the open market. Players of his caliber — and defensemen in particular — are commanding five, six, seven million a season for their services. However, if he’s desperate to return to Los Angeles, or San Jose, or Anaheim, that may work against him — forcing him to take a little bit of a haircut (compared to what he could make), although I’d be shocked if he makes less than $4.5M next season regardless of where he plays.

Internal :: Kyle Quincey was likely brought in as a contingency plan for Stuart’s departure. He’s a restricted free agent but will very likely be re-signed and inserted in Stuart’s position on the top four. Brendan Smith, who will play his rookie season next year, as well as Jakub Kindl are both ready for more minutes.
External :: Ryan Suter is an obviously desirable replacement, but he’ll be highly sought after if he reaches July 1st. Other potentials hitting the market are Dennis Wideman, Pavel Kubina, Filip Kuba, Bryan Allen, and Greg Zanon.

WHAT DO YOU THINK
Use the form below to give us your take on whether the Wings should try to get Brad Stuart back at a reasonable rate. Then, sound off in the comments with your thoughts. Has he been a good soldier who has earned the right to play on the West Coast and be closer with his family — or does he owe the Wings for helping him find his game? Graham asked if I was going to post some free agent loss candy with this one — since it’s basically a foregone conclusion that he’ll be departing — but we’re still interested in seeing if the fanbase is holding out hope that he’ll be retained.