The Latinas love it.

Once in a lifetime — if we’re lucky — a film comes along that changes the way we look at ourselves, not to mention the way we view cinema forever.

We, friends, have HorseCop. And Jurassic Park. But mostly HorseCop.

In his insanely brilliant follow-up to Machete, director Robert Rodriguez gave us chills, thrills, and quite a few spills from the new most famous horse in the world (suck on that, Seabiscuit). It’s a dark romantic mocku-dramedy rife with car chases, gun fights, naked women, broken bones, mace (the badass medieval weapon, not the pansy spray), and features a suave leading man as he sexes his way to all the bad guys, bringing an end to dog-fighting, illegal trafficking, and global warming in one fell swoop.

If you can saunter into HorseCop and come out the same man or woman two hours later, you’re clearly some sort of demon person and you aren’t welcome here anymore. Put Xanadu back on and crawl into your lonely, dark, lonely darkroom. Alone.

If you think you’re man (or woman) enough for HorseCop, buckle your seat belt, grab your sack (or ovaries) and hit the next showtime.

An impossibly handsome and independently wealthy young man decides that his sexual prowess could be used for good, instead of just gooooood and quickly rises through the ranks within the Fuckyeah America Police Department. His once-partner has gone rogue — now a kingpin himself — and Officer Cop must learn to work with a new partner.

While Officer Cop is no stranger to sowing his oats, he’s going to have to contend with a new type of oats… the kind his teeth-kicking, fire-breathing, death-bringing mildly-retarded thoroughbred partner has tucked in his cheek.

Can they work together? Will each be jealous of the other’s manhood? Will Office Horse ever learn to love again after losing his filly (played by Sarah Jessica Parker) to a 33-story drop off of Frost Bank Tower (the tallest non-residential building in Austin and first sky-scraper to be begun following September 11th)?

Much of the tension between the partners stems from Officer Horse’s loss, since Officer Cop pulls no punches letting his equine counterpart know exactly how he felt about her looks (“She looked like a fucking horse, bro.”) 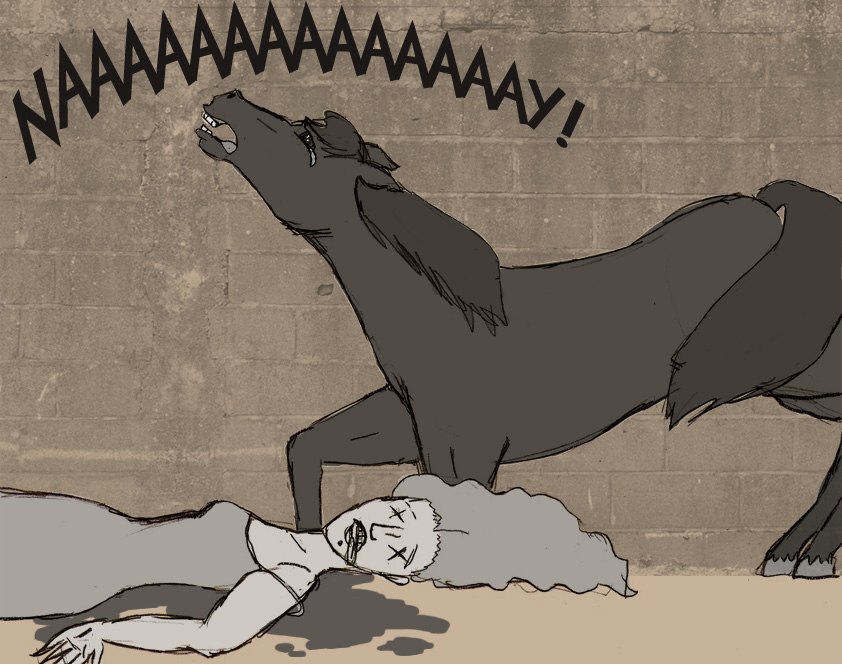 Surefire Future Hollywood Walk of Famer Robert Discher is two parts Lorenzo Lamas, three parts Chuck Norris, and one part Daryl Hall — but that’s the part that counts most…ladies. Officer HorseCop is a man’s man — a flying bear in a world of sharp-toothed birds, big enough for Willa and two Duffs. When he’s not personally ending world hunger or building roofs over the homeless with nothing but his two hands and a couple nails, he’s precariously juggling the women who love him: a number so high that mere mortals can’t fathom. It even has its own symbol. It kind of looks like Prince’s old name. But sexier.

The squeeze we see most often on-screen is ably played by Vanessa Hudgens, who has been quoted as saying that she “can’t even look Zac anymore” after sharing only a few testosterone-fueled moments in Discher’s trailer rehearsing lines. Which is odd considering she has a grand total of zero lines, aside from moans and sounds of painful desperation.

Fresh off of his breakthrough role on television, Equine McYzerman is nothing short of Oscar fodder. If he’s overlooked during awards season, it’d be a crime akin to every woman on the planet losing to Erin Brockovich’s cans in 2001. Don’t make the same mistake twice, Academy. If ever an animal has deserved attention for one’s performance, it’s this. McYzerman has recently checked into rehab, amid reports of “dehydration,” but has said he’d be honored to reprieve the role, should anyone be alive long enough to make an awesome enough sequel: “That’ll show that little bitch Toto who’s the boss…”

In a stellar turn as the good cop gone bad, is the legendary Bruce Campbell, whose notably lines all include the word “Boomstick” — only with a thick, poorly-done Scottish accent that no one seems to understand, even on-screen for some reason. Brilliant cameos from “Smooth” Billy Dee Williams, Jimmy Smits, Christopher Lambert, Jeff Daniels, and Verne Troyer — NO I KNOW! I thought he was dead, too — only increase the starpower of an unruly cast of misfits, sexpots, and once-demi-gods.

CLAIMS FROM THE MASSES

All of the Latinas streaming out of the theatre said that they were no longer wearing their panties — but they weren’t sure how that happened. As they stumbled into the lobby, many of them smoking cigarettes lit with the smoldering embers of what remains of their undergarments, they seemed to have a sort of euphoric confusion about them. A handful even stopped by the local convenience store to buy a pregnancy test, convinced that they were now carrying an immaculately conceived lovechild, which is now beginning an eight-month process (yeah, the baby’s that awesome) of perfecting its bicep curls while slowing building its awesome and quickly growing sideburns.

“I don’t think it’s an exaggeration to say that this movie saved our marriage,” said John and Jane Q. Lonelysheets, a long-married couple from parts unknown. “All I know is we were stuck in a rut, banging our head against the metaphorical brick wall until we saw HorseCop and now we have to rush home to create several thousand babies.”

A ten minute sandwich-making montage really hit home with Madison native Zachary MacRostie. “I’d lost all faith in humanity’s ability to make a good sandwich,” MacRostie would later say, “and then I saw HorseCop and I knew all would be well in the morning. I mean to think… Officer Horse Cop uses the same kind of mustard I do? I cried for an hour.”

Big thanks to @stevieroxelle for the art design, which is simply breathtaking in its beauty. Another big thanks to @bradonweb for helping with character development. 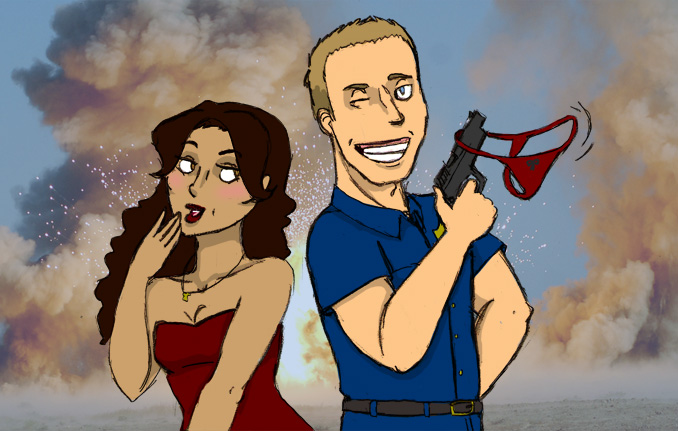