Dec. 11 :: These Things Are Always Touching Me… In Places! 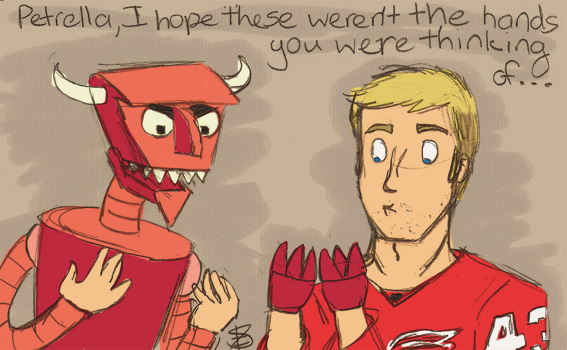 WHAT’S ALL THIS THEN?
Our beloved Red Wings are forced to endure a few hours in New Jersey, playing the Devils at 7pm Eastern. Many, many showers will be needed to get the funk of America’s landfill out of their skin.

WHAT’S THE BIG IDEA?
Detroit plays their fourth game of the week (and sixth in 8 days). They had a very nice win last night against Montreal, but they started to look a little tired toward the end of the contest. Back-to-back game. Beware.

NOW WHERE WERE WE?
The last matchup between these two squads was over a year ago, December 5th. The Wings dropped the shootout (SURPRISE!) for a final score of 4-3. Chris Osgood lost that contest (SURPRISE AGAIN!) — his fourth loss in a row during an awful season. Goals were scored by Tomas Holmstrom, Kris Draper, and Patrick Eaves. The Wings were without Brian Rafalski (back), Andreas Lilja (difficulties recovering from getting the shit kicked out of him), Johan Franzen (knee), Valtteri Filppula (wrist), Jason Williams (broken leg, chronic vanillitis), Niklas Kronwall (your knee ain’t supposed to bend that way, playa)

OH, HI AGAIN
Nobody on the Devils roster used to be a Red Wing, but there are there Michiganders: Brian Rolston (Flint), Andy Greene (Trenton), and the currently injured Matt Taormina (Warren).

MEMBA ME?!
Brian Rafalski played 643 combined regular season and playoff games with the New Jersey Devils. Also, Drew Miller was born in Jersey. Sorry for all of those horrible things I’ve said (and will continue to say) about your homestate, SNP.

BEST NAME NOMINEE
It might be captain Jamie Langenbrunner.

THEIR LAST GAMES
:: Detroit defeated Montreal, 4-2, last night.
:: New Jersey also played last night, losing 3-2 to Ottawa. They think they were hosed on a call that would have tied the game in the third — no dice.

Scratches
Jakub “My Ridiculous Circuitous Plan is One Quarter Complete” Kindl [in Grand Rapids]
Patrick “What a Surprise. For You. Finding Me in the Refrigerator” Eaves

Honorable Mentions
Todd “As Lousy as it is Brilliant” Bertuzzi
Jiri “Definitely Probably Not” Hudler
Darren “They’re Very Good Hands” Helm
Jonathan “How Delightfully Ironic” Ericsson
Chris “You Hit a Sour Note About 200 Years Back” Osgood
Aaron “You Can’t Just Have Your Characters Announce How They’re Feeling! That Makes Me Angry!” Downey
*If there are any that you think I missed, throw them in the comments — the best one will be shared for all to enjoy on the TPL Facebook Page*

THE FIVE HOLE
1. Chris Osgood takes the crease during the second half of a back-to-back, and immediately after traveling. It will be his second game since returning from injury (the first was an overtime loss to LA last Saturday).
2. I’m in love with this defense. I said a few games back that the only defenseman that hadn’t impressed me yet was Niklas Kronwall, and when he flicked that nasty wrist shot in the Canadiens game, it was official: I was impressed. The six haven’t always impressed AT THE SAME TIME, but the way these guys are playing… they’re love-worthy.
3. Speaking of the defense, they accounted for quite a bit of the offense last night. It’d be spectacular if guys like Henrik Zetterberg, Johan Franzen, and — really? — Todd Bertuzzi could pick up the pace a bit tonight and spread the scoring out a tad.
4. Martin Brodeur returned to the Devils net last night, and he’ll very likely play the second half of the back-to-back, too. Sure, he’s not what he used to be, but he’s a dandy. We’re facing another tough goaltender tonight.
5. How awesome would it be if we had our first hat trick tonight, immediately following the big announcement at The Big House?

WHAT WE LEARNED AGAINST THE CANADIENS
Original Six matchups are fun. Who knew…

DEVIL WE COVET (JJ Special)
Easiest one of the entire league: Zach Parise.