Go get your fries, Hockeytown 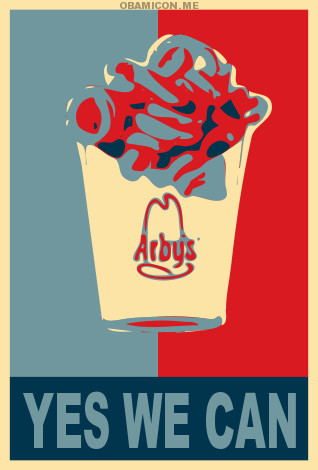 Arby’s, in all of their awesomeness, has heard your calls for justice — and they’re ready to return your curly fries IF they turn out to be preferred, after all. Thanks to Fox Sports Detroit (with this article from Dana Wakiji), Hunter Public Relations, and Arby’s Restaurant Group — there’s a VOTING PAGE up, that will live on Fox Sports. Go vote now. Go back and vote later. Vote several times.

The curly fries are within reach, Hockeytown. You can all smell them. Now go get them.

The winner will be announced live during The Big Chill outdoor game between Michigan and Michigan State.

We may have started the march, but each and every one of you that used the hashtag on Twitter — or commented on the Facebook page or TPL — or shared the link among friends — or sent us photos of Sports Illustrated — or represented with the shirt — or made their presence known on Operation: Curly Fries’ cavalry — made this happen. We’re just three random dudes with a phone number without your support, and we’re extremely proud to have had you behind this idea, and we’re thrilled to be the mouthpiece on such an important issue.

Yes, fans of other teams may mock us, or talk about “how rough things must be in Detroit.” But it wasn’t about that, and we all know it. It was about bandying together and getting back something that we’ve grown to love, as a community — and as hockey fans. Arby’s Curly Fries and Red Wings success go hand-in-hand. We love them both. And they’re almost back together again… where they belong.

Let’s take a walk down memory lane… a visual history of the glorious awesomesauceness that has been Operation: Curly Fries.

Immediately following our initial Operation: Curly Fries post, we were fortunate enough to get the attention of Puck Daddy’s Greg Wyshynski. He was totally behind our fight, and asked if we had a few minutes to chat. The result was this magnificent piece at Yahoo!’s hockey haven: 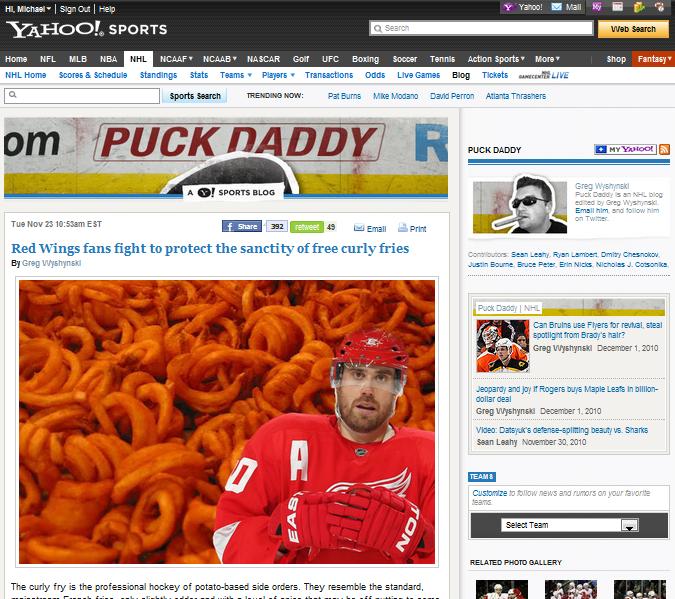 The hashtag #operationcurlyfries hits the big time — we received over 500 mentions in the first 24 hours, and well into multiple thousands over ten days.

Soon after, our t-shirt partner, Underground Printing, alerts us that we’ve sold a ton of Curly Fries t-shirt, proving further that the world wanted this injustice righted, and quick. Our goal of filling the Joe with 19,000 people sporting Curly Fries shirts was well on its way (for the purposes of this update, “well” means “one for every few hundred”).

Within days, we received that beautiful comic you see below — from our new friend Travis Ma at HockeyComics.com, who chose Operation: Curly Fries as the story he wanted to feature that week. Isn’t our little animated Wings fan adorable? All she wants is some curly fries, Emo Arby’s Guy. Don’t be a punk.

We got some traction AT the games, courtesy of our good friend @thetinnishflash: 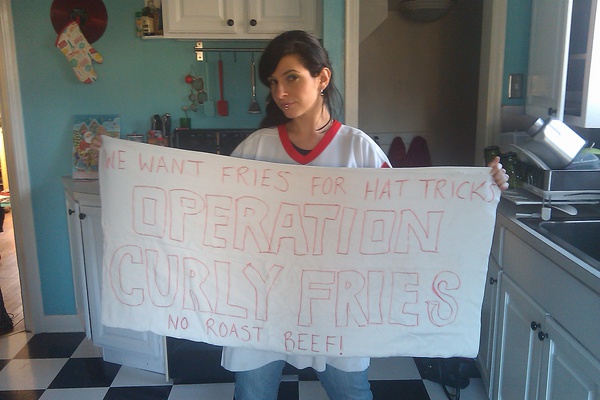 We were lucky enough to get some recognition from Sports Illustrated, in a non-swimsuit issue (FOR NOW). Featured in the The Strike Zone, part of the Scorecard section, of the December 6th issue of SI. You can see the OCF mention in this Twitpic from Friend of TPL @Scott_Sabo: 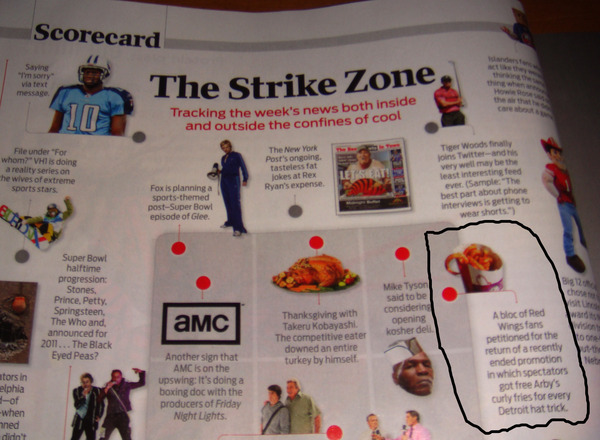 We have ended up having a pretty solid relationship with Arby’s. We sent all of these photos and benchmarks to Arby’s as they came in. They thought they were all fantastic — and loved how emotional Red Wings fans had gotten over their delicious potato snacks. If it was just a silly endeavor, we would have gotten nowhere fast. But it wasn’t. It was something bigger. It was a beautiful, entertaining, community-building exercise that had the outcome we all hoped for and deserved.

Go get your curly fries, Wings Nation. You’ve just about earned them.

4 thoughts on “Go get your fries, Hockeytown”