Nov. 30 :: What’s Nordberg Doing in Detroit? So Send Him Some Plane Fare and a New Pair of Pants 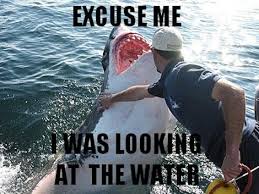 WHAT’S ALL THIS THEN?
Your Red Wings close out November against the Sharks — a late 10:30pm start and only the second Wings Wings Tuesday of the season.

WHAT’S THE BIG IDEA?
Detroit is rolling, having gone 9-2-1 in the penultimate month of 2010. Someone learned a new word!

NOW WHERE WERE WE?
Last we saw the Sharks was May 8th. It wasn’t pretty, as the Guppies bounced the Wings from the ’10 Stanley Cup Playoffs. They went on to (SURPRISE!) get smoked in the third round, despite having named known finisher Joe Thornton their captain.

OH, HI AGAIN
There are no former Wings playing in St. Joe, but their bench boss is former Babcock assistant Todd McLellan.

MEMBA ME?!
Brad Stuart was drafted by the Sharks. He played a little more than five seasons in California, but was traded to the Bruins in November of 05. The return was the aforementioned Jumbo Post-Season Vanishing Act wearing #19.

BEST NAME NOMINEE
Is it weird to anyone else that if you A-Rodded the Sharks goaltenders, you wouldn’t know which I was referring to if I said “AntNi”? I’ve got a soft spot for Antero Niittymaki because of the ridiculous amount of repeated letters in that name. I had to Google it to make sure I got it right. It is, in fact, two I’s followed by two T’s. Crazy Finns.

THEIR LAST GAMES
:: Detroit defeated Columbus 4-2 on Sunday. It was beautiful.
:: San Jose defeated Edmonton 4-3 on Saturday. The internet tells me they’re struggling with injuries this season.

Scratches [in memory of the late Leslie Nielsen]
Jakub “Good Luck, We’re All Counting On You” Kindl

THE FIVE HOLE
1. Jimmy Howard will be starting his 13th straight game for the Red Wings, but Khan tells us that streak will come to an end this weekend. Chris Osgood should be able to return (he’s been practicing), but if he’s not — Joey MacDonald will start in Los Angeles.
2. Speaking of looking ahead to the weekend, Kris Draper will be returning either Friday in Anaheim, or Saturday in LA. Unless, of course, he doesn’t. Let’s pretend Draper returns Friday. That gives only THIS game for the Millers, Hudlers, and Eaveseses of the world to make their case.
3. Nicklas Lidstrom has gone three games without a point. Clearly, his age has caught up to him. In the last week. Byfuglien for Norris. Sarcasm. I has it.
4. Our own little Flapjacks has been playing really well — and he’ll need to pick up the slack with Mike Modano out (and not really blowing the doors off the scoresheet anyway). He’s been killer, so here’s hoping he continues to man up.
5. Congratulations to draft pick Riley Sheahan (who I had the opportunity to interview at the Draft), who was selected for Team Canada’s World Junior Selection Camp.

WHAT WE LEARNED AGAINST THE BLUE JACKETS
Suck it, O’Halloran.

4 thoughts on “Nov. 30 :: What’s Nordberg Doing in Detroit? So Send Him Some Plane Fare and a New Pair of Pants”