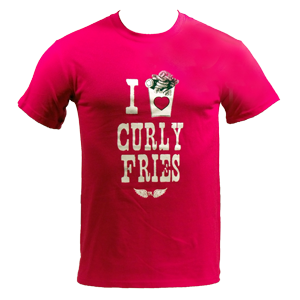 By now, you’ve heard the horrible news. The Detroit Red Wings’ fast food partner, Arby’s, has changed their special giveaway if a Red Wing nets a hat trick. Deviating from their classic and awesome Curly Fries, they’ve begun offering something called a Small Roast Beef Sandwich should a Winged Wheeler put their third puck in the back of the net.

Make no mistake — I’ve got no beef with the beef. In fact, those sandwiches are delicious. But there is a series of good reasons why we should band together and demand that the deal revert to its natural state: one in which Red Wings fans all over the nation get their delicious, deep-fried curlies the morning after an emotional offensive display. This campaign has absolutely nothing to do with The Production Line Store’s Curly Fries t-shirt, because it’s a well-known fact that each and every one of you have at least t-shirt in your wardrobe that’s deemed “vintage” or “classic” and — therefore — much cooler than the rest of your outfit-completing crew necks.

No. It goes deeper much than that.

First, Exhibit A. Take the following video as an example (hat tip to @bradonweb for passing along the video when we needed it most).

Hearing Mickey say “He’s thinking Small Roast Beef Sandwich” doesn’t have the same ring to it as “He’s thinking Curly Fries!” Likewise, “BINGO! SMALL ROAST BEEF SANDWICH” is very much the antithesis of the excitement every last one of us felt when we heard “BINGO! CURLY FRIES!”

Coupled with the fact that “Curly Fries” have become synonymous among Red Wings fans with dynamic scoring displays, and you’ve got a hell of an argument to keep Fries the Fast Food Face of the Franchise.

Exhibit B has more to do with frequency than urgency. In the past three seasons, there have only been THREE Red Wing hat tricks: the pictured Zetteronslaught of the Ducks last November, a three goal effort from Z in Game 2 of the Phoenix series last season, and a four-goal jailsexing of the Sharks at the hands of Johan Franzen this past May.

I’m sure Arby’s has a good reason to have changed their Hat Trick giveaway. And I’m sure it has something to do with money. Perhaps it’s cheaper to give away a Small Roast Beef Sandwich than it is to give away Curly Fries. Perhaps they’re hoping people will try a Sandwich and make Arby’s their meal of choice when they’ve only got a few minutes. My question to them is this: is it worth the extra few cents when it’s only been utilized three times — and your target audience is a little bit annoyed that they can’t get curly fries? I’m willing to bet a Curly Fries shirt that they simply don’t know people have noticed things have changed…

Exhibit C is courtesy of my wife, a noted vegetarian and the designer of more than one of the TPL Store’s trademark shirts — including Curly Fries. She caught wind of the changing Arby’s landscape during the last telecast and offered this: “I’m pissed. As a vegetarian, I’d much rather get my hands on some curly fries than dead animal flesh.”

I looked up from my juicy t-bone steak, which was topped with chicken wings and bacon, and realized that she had a point. Vegetarians and vegans may not make up a large percentage of Wings fans, but they’re there nonetheless, and they’re not rooting any less hard than the rest of us (though their lack of protein may prevent them from rooting AS LONG). They deserve to be rewarded by the Henrik Zetterbergs, Johan Franzens, and Pavel Datsyuks of the world just as the rest of us do.

So join us. Join us in the comments. Join us on “The Twitter” (using the hashtag #OperationCurlyFries). Join us on Facebook. Join us in spirit. Join us in legion. If we get 100 comments, we WILL bring this to Arby’s attention and be the mouthpiece for Red Wings Nation, fighting to get your Curly Fries back. Let us know how you feel and if it’s worth the effort.

Why now? Because we’re getting close… the Wings have had a few two-goal efforts lately, and we can all smell it. And, if I’m not mistaken, 100% of us are smelling curly fries.

From our good friend @lolabythebay, comes this wonderful photographic proof that we, as Red Wings, do in fact ADORE our curly fries following a hat trick. In this case, Franzen’s four goal playoff performance: 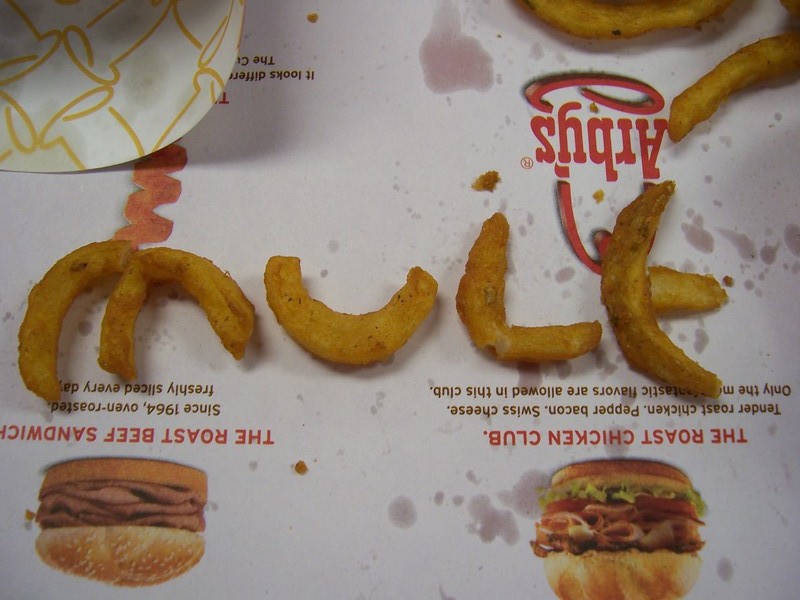