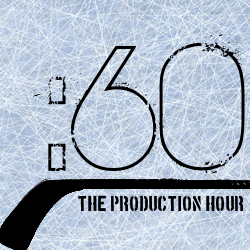 Not enough of a premiere for you yesterday? We definitely agree, and that’s why TP:60 takes it up another level with Part Two of the season premiere. Tune in as the guys sit down with Sean Gentille from The Sporting News and Joe Yerdon from NBC Sports’ Pro Hockey Talk to get all of the insight on what to expect from the rest of the NHL this year, including Marty Turco’s chances in Chicago and Brooks Orpik’s straying knees. Chris and Joe also re-hash their longtime college hockey debate and the entire gang weighs in on a “Who Would You Rather?” between Mrs. Mike Modano, Willa Ford, and Mrs. Mike Comrie, Hillary Duff.

TPL and TP:60 also want to congratulate Doug Houvener for winning the voting battle to determine the official logo for the show. The winning entry took home 56% of the vote, and we appreciate Doug lending his creative abilities to the show and giving us such an excellent logo.

Questions for us? Contact@theproductionline.us is your direct line into our ear.